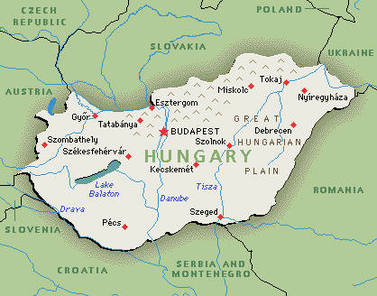 ﻿This is a map of modern day Hungary.  The star is the capital, which is Budapest.  The Magyars officially settled down in Hungary in 900 when King Arpad conquered Hungary. ﻿
9th century - Magyars under Prince Arpad settle Danube plain

1000 - Stephen I, a descendant of Arpad, recognized by Pope as first Christian king of Hungary, expands Hungarian control over Carpathian basin.

1342-1382 - Reign of Louis the Great, who annexes Dalmatia and founds Hungary's first university at Pecs.

Ottoman invasion1526 - Ottoman Turks defeat forces of Hungarian king at Battle of Mohacs, establishing control over most of the country.

1918 - Austro-Hungarian Empire is broken up at the end of World War I. Hungarian republic is proclaimed following a revolution.

1920 - Under the Treaty of Trianon, the Entente powers award more than two-thirds of what had until then been Hungarian territory to Czechoslovakia, Romania, Russia and Yugoslavia. The re-defining of Hungary's borders leaves a third of native Hungarian speakers living outside the country.

The National Assembly re-establishes the Kingdom of Hungary, but as the Entente powers had refused to allow the return of a Habsburg king, Admiral Horthy is made regent.

1938 - After Munich Agreement cedes part of Czechoslovakia to Germany, Hungary regains some of the territory it lost in 1920.

1940 - With the encouragement of Nazi Germany, Hungary regains northern Transylvania from Romania.

1941 - Germany invades the Soviet Union. Hungary allies itself with Germany, and loses a large part of its army on the Eastern Front.

1949 - A new constitution makes Hungary a Communist state. Industry is nationalised, agriculture collectivised and a wave of terror launched.

1956 uprisingA statue of the Soviet leader Stalin is toppled during the 1956 national uprising
1956 - Uprising against Soviet domination suppressed by the Soviet Army. Janos Kadar becomes head of government.

1989 - May - Border with Austria is opened, and thousands of East Germans escape to the West. Communist state in Hungary is dismantled and a transition to a multi-party democracy starts.

1991 - Soviet forces withdraw from Hungary. The Warsaw Pact is dissolved.

2002 June-July - PM Medgyessy admits to having worked as a counterintelligence officer for the secret service in the late 1970s and early 1980s. However, he denies ever having collaborated with the KGB and says he worked to steer Hungary toward IMF membership without Moscow's knowledge.

2003 April - Referendum overwhelmingly approves Hungary's membership of an enlarged EU. However, turnout is only 46%.

2003 June - Parliament amends controversial Status Law on work, health and travel benefits for ethnic Hungarians in neighbouring countries which criticised it as interfering with their sovereignty and discriminating against other ethnic groups.

2004 December - Low turnout invalidates referendum on whether or not to offer citizenship to some five million ethnic Hungarians living outside Hungary.

2006 September-October - Violence erupts as thousands rally in Budapest demanding the resignation of Prime Minister Gyurcsany, after he admitted his government had lied during the election campaign.

2007 February - A commission of enquiry into the previous autumn's disturbances, in which 800 people were hurt, finds fault with the police, the government and the country's whole political elite.

Economic woes2008 March - Government defeated in opposition-sponsored referendum calling for abolition of new fees for health care and higher education. The move is seen as a setback for government plans for economic reforms.

2008 April - Mr Gyurcsany reshuffles his cabinet after the Alliance of Free Democrats quits the two-party coalition.

2008 October - Hungary is badly hit by the global financial crisis and the value of the forint plummets.

The International Monetary Fund (IMF), the EU and the World Bank grant the country a rescue package worth 20bn euros (£17bn).

2009 March - Hungary and Russia sign deal to build part of the South Stream pipeline across Hungarian territory. Budapest also agrees to jointly build underground gas storage facility in Hungary, a move which will turn the country into a major hub for Russian gas supplies.

2010 May - Parliament passes law allowing ethnic Hungarians living abroad to apply for Hungarian citizenship. Slovakia protests at move, accusing Hungary of revisionism, and threatens to strip any Slovak who applies for dual nationality of their Slovak citizenship.

2010 July - International lenders suspend review of Hungary's 2008 funding arrangement, saying the Fidesz government has failed to spell out its plans for bringing down the budget deficit clearly enough.

2010 October - A state of emergency is declared after a torrent of toxic red sludge escapes from a reservoir of chemical waste, killing seven people and injuring 150. Rivers in western Hungary are left seriously polluted by what is thought to be the country's worst-ever chemical accident.

New constitution2011 April - Parliament approves a new constitution that opponents say threatens democracy by removing checks and balances. The EU expresses concern over the law and asks for it to be withdrawn.

2011 December - Parliament approves controversial new election law that halves the number of MPs and redraws constituency boundaries. Critics object it tilts the system in favour of the governing Fidesz party.

2012 January - Top rate of VAT is increased from 25% to 27% - the highest rate in the EU - as part of a series of austerity measures aimed at curbing the budget deficit.

Tens of thousands of people take part in protests in Budapest as controversial new constitution comes into force.

2012 April - Hungary makes small changes to the Central Bank law, and the European Commission agrees to resume talks with the IMF on a massive bailout.

2012 May - Veteran Fidesz politician Janos Ader elected president by parliament. His predecessor and fellow Fidesz supporter Pal Schmitt resigned in April after it was revealed that he had plagiarised the works of others in his doctoral thesis.

2012 June - A statue commemorating controversial wartime leader Admiral Horthy is unveiled in the village of Csokako. Critics see this as a sign that economic hardship in the country is fanning radical nationalism and that the far-right Jobbik party - whose members play a prominent part in the unveiling ceremony - is taking advantage of popular discontent.

2012 October - In a speech given on the anniversary of the failed 1956 revolution, Mr Orban attacks the EU for interfering in Hungary's domestic affairs.

Former PM Gordon Bajnai announces the formation of a new centrist alliance, Together 2014, designed to unseat Mr Orban at the next parliamentary elections.

Jobbik MP Marton Gyongyosi sparks outrage by calling for a list of officials of Jewish origin to be compiled, saying that they could pose a "national security risk".

2013 March - Parliament approves controversial fourth amendment to 2012 constitution. The amendment curbs the powers of the constitutional court, and critics say that it undermines democracy by removing a number of checks and balances.

Economic green shoots?2013 May - Figures show that Hungary succeeded in bringing its budget deficit down to below the figure of 3% required by the EU as a condition of releasing a country from the excessive deficit procedure (EDP) mechanism.

2013 June - Government unveils draft of fifth amendment to constitution. The new provisions include a ban on political advertisements in the independent media and restrictive guidelines on the recognition of religious groups.

Figures show that Hungary emerged from recession in the first quarter of the year. The government maintains that recent positive economic indicators are a vindication of its unorthodox economic policies.

The EU releases Hungary from the EDP mechanism.

2013 July - The European Parliament calls on Hungary to reform its constitution to bring it into line with EU values.

2013 August - A Budapest court finds four far-right extremists guilty of the murder of six members of the Roma community in 2008-09. Three of those convicted in what is Hungary's first racially motivated serial murder case are given life sentences.

Government says that it has re-drafted the fifth amendment to the constitution in response to EU criticism that basic rights are being eroded. The latest draft amends the passages covering election campaigning and the status of religious groups. Critics say that despite these changes, the constitution as a whole still runs counter to EU values.

2013 September - Parliament approves the latest constitutional changes, despite a threat of legal action from the EU.

Statue controversies2013 November - A statue of wartime leader Admiral Horthy is unveiled in the centre of Budapest. The event is organised by a prominent member of the far-right Jobbik party and prompts renewed charges that the government is making no effort to prevent the rehabilitation of Horthy and other twentieth century right-wing figures.

2013 December - Supreme Court blocks a government attempt to have loans denominated in foreign currencies declared unlawful. Many Hungarians who took out loans in foreign currencies - taking advantage of lower interest rates than for forint loans - during the pre-crisis boom have struggled to service their debts since the national currency tumbled in the wake of the 2008 financial crisis.

2014 January - The unveiling of plans for a memorial marking the seventieth anniversary of the German occupation in 1944 prompts criticism that the government is seeking to play down Hungary's wartime role as a Nazi ally. Following an international outcry, the plans are put on hold.

2014 February - The government approves a controversial 10bn euro (£8.3bn) deal with Russia over the financing of two new reactors at the Paks nuclear power plant.